Georgia has quite a few bats but not all of them are colonizing nor do many of them take up residence in attics.  The most common bats removed during bat removal jobs are the Big Brown, Little Brown & Mexican Freetail. 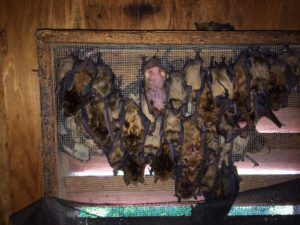 Dozens of times each year we get called out for bat removal when someone has tried to seal up a home and failed.  What happens often is the bats get sealed in or they couldn’t get rid of them and decided to hire a professional.

Please note, never allow anyone to simply wait for bats to fly out at night and then seal the openings.  Bats don’t always leave at the same time, some may remain inside overnight.

There are only two ways to provide professional bat removal from an attic:

The next step is: Bat Exclusion & then Guano Clean-up

Some of our Bat Removal Videos

The Nation’s largest organization involved in the study & understanding of bats: Bat Conservation International has the following on their website:

“The use of pesticides against bats is illegal, and greatly increases the likelihood of bats coming into contact with people and pets. Naphthalene, the active ingredient in mothballs, and ultrasonic devices are often promoted as bat repellents. Ultrasonic devices have proven ineffective, (one study found that ultrasonic devices may even attract bats). In order for naphthalene to be effective such a large quantity would have to be used that it would pose a significant health hazard to humans.“

Any questions give us a call!